“You teach yoga? Didn’t you know that yoga is demonic!” My eyes widened as my friend expressed her opinion. I thought, what in the world is she talking about? Yoga is an exercise class. She went on to explain that during the meditative part of yoga, a person could open themselves up to evil spirits [in part through the mantras and chants]. Has my friend flipped her wig? For over a decade, I had attended Hatha yoga classes and never experienced such a thing! In Hatha yoga, the class is about performing the physical postures, deep breathing, and includes a short meditative session at the end.

Later, her comments swirled in my mind. So I did some research and found out that yoga was performed in the Hindu and Buddhist religions. However, archeologist found stone seals with yoga postures dating back to around 3000 BC, which was before the establishment of Buddhism (600 BC) or Hinduism (1500 BC). The Hindus and Buddhists must have realized how healthy yoga postures were for the body and mind, so they incorporated them into their religious practices.

GET SPIRITUALLY FIT ONE VERSE AT A TIME

My friend’s comments continued to disturb me, so I prayed. You need to make yoga Christian echoed in my mind. I had no idea how to make yoga Christian until five years later when I began memorizing Bible verses. At that time, I participated in a small group at my church studying The Purpose Driven Life book by Rick Warren. In this book, Rick challenges readers to learn one Bible verse per week. I accepted the author’s challenge.

After learning twenty-five verses, I realized, I could make my yoga classes Christian by incorporating God’s Word into them. [This is much more than a yoga class with a token opening Bible verse and a closing prayer added — spiritually offering little more than a chance encounter with God.] For five years, I had been waiting on God to show me how to bring Christian beliefs into the yoga class, but the whole time God had been waiting for me to learn Bible verses so his words could be recited during the yoga poses.

In God’s perfect timing, two months later, leaders at my church asked me to teach an exercise class. So, in 2004, Scripture Yoga began. Feedback from students affirms the impact.

One of the class attendees, Pam Antoun, wrote, “Scripture-based yoga has been an incredibly productive use of time. Physically, I am stretching and strengthening muscles, some of which I never knew I had. Mentally, it’s restful as I am simply focusing on Scripture, which is full of God’s will for living a full, meaningful life. After every class, I feel spiritually nourished, well centered, and better aligned with God’s will. The special breathing integrated throughout the class is extremely cleansing and refreshing. I feel like my entire body is more efficiently oxygenated and relaxed. Although I have enjoyed other yoga classes, the Scripture-based yoga seems all-around more effective in improving my physical, spiritual, and mental health than any other yoga class I have attended.” 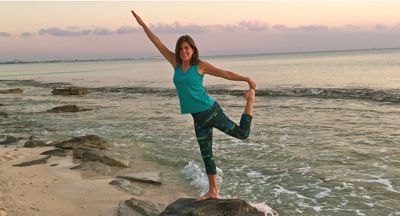 I taught Scripture Yoga by reciting Bible verses while we held the yoga poses. By the end of the first year of teaching, I memorized more than 150 verses and wrote them on index cards. At this point, I sorted the scripture cards into dozens of topics, and I taught classes based on a biblical theme.

After ten years of teaching Scripture Yoga, a Christian yoga instructor from out of town attended my class. Afterward, she expressed her appreciation of how I incorporated a faith-centered approach to my yoga class. For further explanation of a faith-centered versus faith-based approach read the article, Moving Beyond Faith-Based Fitness.

The visiting yoga instructor explained that she had been teaching yoga for years, but Christian yoga for only one year. During the past year, it had been challenging for her to create the faith portion of her classes. She was interested in how I incorporated Scripture into my yoga classes. It is valuable to do more than just play Christian music and recite one Bible verse—which would make a yoga class faith-based.

A BIBLE-BASED RESOURCE TO STRENGTHEN HEALTH AND IMPROVE SPIRITUAL WELLNESS

It was at this time I realized I should write a book with the faith-centered themes I had created for my Christian yoga classes. In 2016, I published Scripture Yoga: 21 Bible Lessons for Christian Yoga Classes, so other group fitness instructors or students could use it for their classes. Pilates, yoga, stretching, and meditation classes could benefit from these biblically themed topics.

The Christian yoga instructor who visited my class wrote in her Scripture Yoga book review, “I found the gem of this book to be the 21 sample lessons. The author has done a beautiful job of compiling Scripture and organizing it according to themes such as: “The Great I AM,” “Praying and Believing” and the “Lord’s Festivals.” Each chapter is like a mini Bible study, which I believe would be an asset for anyone, from those practicing or teaching Christian yoga, to someone who is looking for new inspiration for reading the Word of God.”

Scripture-based yoga seems all-around more effective in improving my physical, spiritual, and mental health than any other yoga class I have attended. -Pam Antoun

I researched Christian yoga information for my book, Scripture Yoga, and found seven Christian yoga training programs in the United States. These programs train and certify yoga instructors to teach Christian yoga. I incorporated their contact information into my book. These seven programs are located all over the US.

–The Living Well Centers in Arizona, Michigan, and Canada

Scripture Yoga is not demonic but a “high-definition,” faith-centered yoga practice where attendees are bathed in the Word of God. It can be done as part of a complete plan to improve and maintain good health and wellness. God is not stupid; He knows whom we are worshipping. A chapter in the Scripture Yoga book titled, “Scrutiny of Yoga,” addresses concerns Christians may have about yoga. The Scripture Yoga ministry goal is for participants to [with faith chant Scripture,] listen to God’s Word, apply it to their lives, and learn about their Creator so they can become more like Him. I am a Certified Christian Health and Wellness Coach, RN, and have a master of health science. When I turned 50 I lost my health. I had ten medical … END_OF_DOCUMENT_TOKEN_TO_BE_REPLACED